When the Moon Was Ours

McLemore, Anna-Marie. When the Moon Was Ours. New York: Thomas Dunne Books, 2016. 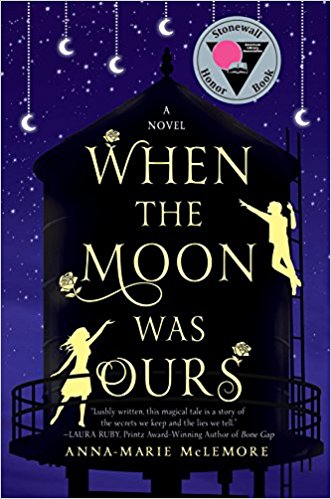 When a town decides to topple their aging water tower, a little girl washes out with the gush of water. Only one little boy is brave enough to approach her, and they have been best friends ever since.

Miel is a young Latina woman who has roses growing from her wrist. Fearing a curse, her mother baptized her in the river, dunking her again and again. Miel floated away and somehow ended up in that water tank, and her mother died in the river and continues to haunt it as La Llorona. Now Miel sacrifices her roses to the river to appease her mother’s ghost.

Samir is a young Pakistani man who has taken the cultural role of bacha posh—a girl child who becomes a boy in order to be the man of the family. He’s always thought that one day he’ll want to be a girl again, but as time goes on, he becomes more and more sure that he’s actually a man. Samir makes lighted moons and hangs them up all over town to help children sleep.

The Bonner sisters, four girls rumored to be witches, are obsessed with Miel’s roses and come up with a scheme to steal them for love magic. Samir works in their father’s pumpkin fields and must negotiate the boundary between employee, friend, and Miel’s protector. All six young people grow and come into their authentic identities through the book.

I wanted to love this book. And I do appreciate a lot of things about it: the thoughtful portrayal of a young trans man caught between wanting to honor his identity and not disappoint his mother; the beautiful descriptions of traditional curandera healing; the love that blossoms between Samir and Miel; the La Llorona motif. Unfortunately, the excessively detailed (and repetitive) purple prose was difficult for me to enjoy. The writing is evocative but a bit thin on plot for my taste.

When the Moon Was Ours won a 2017 Stonewall Book Award for Children’s & Young Adult Literature, starred reviews from Kirkus and School Library Journal, and the 2016 Tiptree Award.