This is a beautiful book. The writing is beautiful, the illustrations are beautiful, and the book itself as an object is beautiful. Author/illustrator Brian Selznick uses a unique storytelling style, with a mixture of dialog-free illustration and prose fiction.

The first 387 pages tell the story of several generations of actors in pictures. Page after page of lovingly detailed and highly textured pencil illustrations chart the Marvels from a devastating shipwreck in 1766, through multiple generations living and acting in London’s Royal Theatre, to the youngest Marvel running away in 1900. Despite having no dialog, the story is captivating and understandable. Selznick is able to capture amazing nuance in facial expressions and it’s fascinating to see the years fly by and families grow and change together.

Abruptly, the narrative jumps ahead to 1990 and a prose section a little longer than 200 pages begins. Joseph, another young runaway, arrives in London looking for an uncle he’s never met. Uncle Albert lives in an incredible 18th century house filled with objects and memories of a long-ago time. In this architectural time capsule, Joseph gets to know his uncle and searches the house for clues to his family legacy. Slowly, Joseph discovers hints of the Marvel family’s history and the reader begins to piece the puzzle together.

The Marvels is a historical fiction novel, a coming-of-age narrative, an adventure story, and most of all a story about family connections and love. Although the words “gay” or “homosexual” are never mentioned, two major characters are gay, and this fact is uncontroversial and unremarked-upon. As Selznick commented in an interview, “It’s just stories about people who meet and fall in love and are there to support each other.”

Outside of the intertwining narratives and gorgeous illustrations, this book is an art object. The cover is an intricate ship illustration in deep purple and shiny gold; the pages are gold-edged, and the binding is thread-sewn—rare in this day and age, particularly for a children’s book. Take a look: 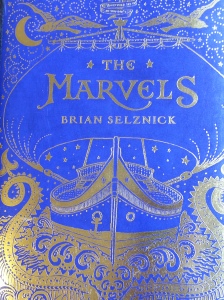 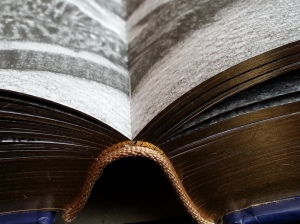 The Marvels is intended for juvenile readers and is absolutely accessible for middle schoolers and engaging enough for adults. It has received a School Library Journal starred review and was a 2016 Rainbow List Top Ten. Learn more about Brian Selznick and The Marvels at this website.

Note: Selznick loosely based Uncle Albert and his fascinating house on Dennis Severs and his famous house. Readers who were delighted by the descriptions of the house are urged to check out the Dennis Severs’ House website.

2 Responses to The Marvels